ABOUT:
Venture with Sylvanna as she goes on a quest finding a lost girl,
which rumored to be trapped in a high tower,
You will encounter many different types of Enemies ( 9 )
and a Boss Battle.
will you be able to fulfill the Journey?
This Game is made for MGGJ5
I picked Shooter and Card Genre in this Jam.

CREDITS:
ALL the Graphics and Sfx are made by me:
YT:https://www.youtube.com/channel/UCnk2vkdS8xAVmK6m_1nKfEA
Help me Reach 100 subs this year!
Check out other Games There!!!

Nice game, but I have some problems while playing it

1. New room needs to load/transition faster, because you can move during the transition process, that would lead you to collide with the enemy. This is not fun at all, please fix.

2. The moving UI is dizzy and distracting, better make it static

3. If the UI shows all Z X C buttons for casting spells, then it should show the shuffle option

4. Is the spider's red orb its weakness? Because I don't feel like it's so.

5. The red glowing damage should fade faster, because the slow color transition made me thought the enemy was regenerating.

6. Final boss is kinda buggy, idk how to describe it exactly. But you can't jump to the other side with normal jump. If you successfully damage him at close range, the earth/lava shield will instantly deals damage to you due to its rotation, make it feel like a punishment.

7. Additionally, in some cases, touching the boss will take more than 1 damage. I think this happens when I tried to use Invulnerability + Madness while standing literally on top of him, then unable to get out in time. Or maybe I just take bonus damage due to the shield. I tried cheesing by getting close to him a lot. Shotgun and Madness causes tons of damage, so why not?

For balancing, I think the single falling projectile needs a buff because it's hard to use, has small area of effect, limited by animation down time, no aiming assist, and no indication whether if it deals more damage than a normal shooting projectile or not. But due to its appearance, I doubt it would.

But overall I think this small game has potential, whether it's gonna be adventure or roguelite, keep up the good work.

1. Fixed,  the transition is now change from 0.1 to 0.2 and temporary player inactive for 0.4 seconds
2 Fixed, I put it in the middle Bottom of the screen,
3. Done!
4. Yes, the single tear  (falling projectile) is the best card to kill the spider
5. I added a letter to the tips sign to make the player know that it's a blocking effect
6. Yes that's purely design intention, I don't want the player to go near the boss, I also added a lava beneath it to really make the player know that it's a hazard area.
7.  I can't fix this :)
8. I added an aim sight whenever that card shows up, also all the magic bullet has only one damage.

THANKS for all the feedback! I really appreciated it XD

What Game Engine was this made with?

You can find this information by clicking "More information" menu, if the developer has specified it. It's Construct. 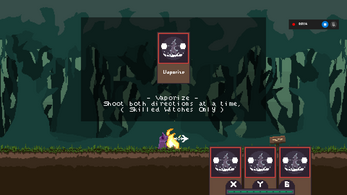 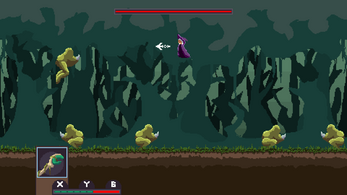 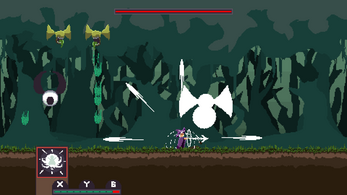